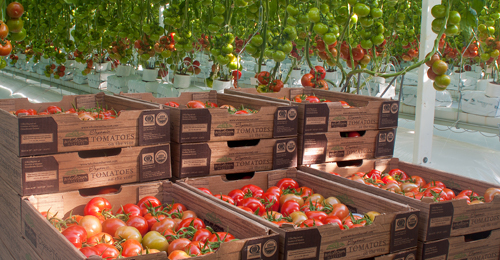 Like its two sister produce farms in Mexico, Wholesum Amado is all-organic, says Ricardo Crisantes, the company’s vice president of sales and marketing.

This year, Cesar Chavez Day and Farmworker Awareness Week arrive at an especially exciting time: Wholesum’s Amado farm is the first produce farm in America to become Fair Trade Certified. That’s big news for a country where 85 percent of the fruits and vegetables consumed are picked by hand.

In 1930, Ricardo’s grandfather began farming tomatoes in Sinaloa, a coastal state in western Mexico. Ricardo’s father, Theojary, studied horticulture at the University of California, Davis in the 1960s, just as Cesar Chavez was founding the United Farmworkers Union, and Rachel Carson was writing Silent Spring. Theojary was captivated by Silent Spring, but he wasn’t sure how he could implement organic farming on his farm. In the 1980s, the family began experimenting. Ricardo remembers spending his high school summers helping his father erect their first greenhouses out of wooden poles, cables, and plastic covers. After discovering natural food markets, food co-ops, and specialty grocery retailers in the United States, Theojary realized that the market for organic produce was much bigger than he expected. Suddenly, his organic farming dreams felt within reach. Over the years, one farm expanded to three; Ricardo and his brothers eventually joined the family business.

When the Crisantes family first heard about how coffee workers were benefiting from the Fair Trade model, in 2010, they saw it as a natural next step. Around the world, workers on Fair Trade Certified farms were not only elevating production standards, they were also using their Fair Trade Premium Funds (additional money earned with every Fair Trade sale) for community improvements of all kinds. They saw everything from farmers investing in transportation and education scholarships for women in Sri Lanka, to communities installing electricity in remote villages in Indonesia. Since earning Fair Trade certification for their farms in Mexico, these Premiums have helped workers purchase their own school bus to help their children get to school, build an at-cost grocery store and tortilla factory, and fund home loans, among other benefits.

At the newly Fair Trade Certified Amado, Arizona farm, workers are already discussing where to put their hard-earned Premium dollars to work. By this summer, Ricardo says, Wholesum’s winter and spring crops in Amado will yield enough Fair Trade Premiums to begin the first round of investments. Since all Wholesum employees already receive basic healthcare (in Mexico and the U.S.), one possible idea is to use Premiums to assist with specialty health care costs, like dental and vision. They have also discussed English and adult education courses. Wherever the investment goes, the decision will be made entirely by the workers, as has been done for years at Fair Trade farms worldwide.